In Making This New Year Greeting Card, What String Types & Colors Would You Use?

Here's a fun way to make a creative New Year card with threads. And, by the way, there’s no sewing involved

Another year is around the corner. So it’s best to jump on that new year greeting card project sooner than later. 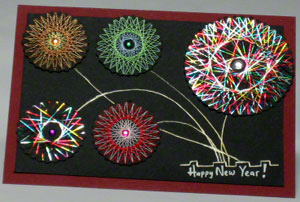 Either way, this time, wouldn’t you like to set off the coming year by putting together a cool and creative card?

If so, then, for this card, use the Spirelli string art technique. Yes, it’s possible to sew a little with this technique, However, there’s no sewing on this card.

Apart from this, there are different colors and types of threads used in putting this new year greeting card together.

Which colors and types would you use in creating yours?

A cool card like this gives you an opportunity to add humor by relating the greeting card message to the card's art or theme. For instance:

Have a Happy Sparkly New Year! 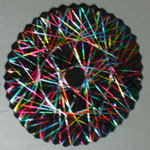 Want to tie down the loose thread when before starting or after finishing the looping process?

Use a very small piece of masking tape to hold the loose thread unto the back of the paper.

And with that last step, the card is finished.

Hope you’ve decided on the colors and types of thread to use in creating your own new year greeting card.

From the pictures above, there were a few other metallic strings that did not make it into the card. They include silver and yellow gold colored metallic thread spools.

Apart from these, there are many more options in the craft and sewing stores.

So the choice is yours. Have fun with the hunt and decision.

And, at the end of the day, may you have a new year that's as fun and vibrant as this new year greeting card depicts.